The Pearlfishers – Love & Other Hopeless Things

They’re back – and they’re back with a bang! Five years after their last album Open Up Your Colouring Book, Glasgow’s magnificent Pearlfishers return with a brand new album. It’s their eighth on Marina Records – a superb comeback full of masterful, classic pop music, driven by main man David Scott’s exceptional songwriting and arrangements.

The album kickstarts with its beautiful title track – a song in the tradition of British songwriters like Paddy McAloon and Michael Head – about ordinary people dreaming and drowning in the big city. “Another foggy Monday morning / Sail the ferry to town / And think of all the people’s dreams…”. The song is led by a Bacharach-like flugel horn motif played by Colin Steele who recorded an entire album of Pearlfishers songs in terrific jazz arrangements: Diving For Pearls (Marina, 2017). The song also features a beautiful string quartet which recalls the graceful understatement of George Martin’s classic pop arrangements.

Could Be A Street Could Be A Saint is a celebration of life during the pre-Christmas days on Glasgow’s Sauchiehall Street: “People are beautiful…”. You can hear the influence of Scottish popsters Pilot whose stacked acoustics and harmonies defined pop sheen in the 70s. The track finds its counterpoint in A Walk Into The Blue Night where you enter a magical world of “sainted streets“ where songs start to flow – with an Ennio Morricone-like combination of minor key harmonies and orchestration.

You Can Take Me There proves that you can create captivating soundscapes with just piano, vocals and a tiny bit of guitar. The track flows on a sublime Gilbert O’Sullivan groove – also reminiscent of Laura Nyro, one of Scott’s heroes.

A long-lasting Pearlfishers tradition continues with the inclusion of a quirky instrumental: A Woman On The Verge Of Becoming A Cyclist (talking about quirky!) sounds a lost 70s movie theme – culminating in a brass band fanfare.

Love & Other Hopeless Things also features two splendid songwriting-collaborations. Once I Lived In London was written with Bill DeMain – Nashville broadcaster, Grammy-nominated author and member of US duo Swan Dive. The beautiful piece of chamber pop recalls London in the 80s: “I sang Spandau Ballet’s ‘True’ / Jobim, Yazz, The Plastic People too…”. Sometimes It Rains In Glasgow was written and performed with Joni Mitchell/Carole King-influenced Becci Wallace. Fab!

The wistful ballad Another Sunflower closes the album on an emotional note. Revisiting the Pearlfishers’ seasonal album A Sunflower At Christmas (2004), this New Year’s Eve song is augmented by a stunning string arrangement and some simple advice: Don’t make resolutions and promises, just keep moving through the wildwood…

Each order via Marina Mailorder comes with a set of Pearlfishers postcards. 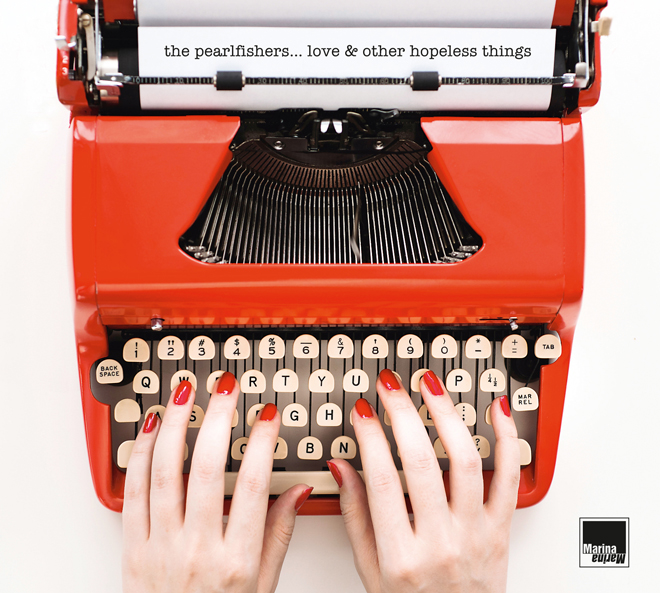