He has written uncountable scores for movies and television, has been rediscovered and sampled by Pulp (whose single “This Is Hardcore” is almost entirely built on a Thomas sample), The High Llamas, Stereolab and Air, and some call him the German John Barry: Peter Thomas, musical madman & daring sound innovator extraordinaire.

While he is best known for his music for two internationally successful movie series – the Edgar Wallace Mysteries and the Jerry Cotton agent films – and his score for the sci-fi TV series “Space Patrol” (Raumpatrouille Orion), the Marina compilation “Moonflowers & Mini-Skirts” (MA 39) – a collection of recordings from the late sixties and early seventies – concentrates on a whole new aspect (and so far undocumented part) of his career. In the late sixties Thomas started to combine his unique soundscapes (as always based on mad, blazing horn riffs & hard-hitting percussion) with funky rhythms & weird electronics.

Powered by an incredible, high-wired rhythm section consisting of Germany´s best studio and jazz musicians (including Siggi Schwab of “Vampyros Lesbos” fame on guitar and Lothar Meid of Amon Düül II on bass!) Thomas created “sonic explosions with enough force to put a man (with his woman) on the moon” (John Bender). Thomas – who was actively involved in the compilation – takes great pride in the fact that all tracks collected here were recorded live with no overdubs. Thomas: “Recording live gives you that certain adrenaline rush that allows you to push your music over the edge – and that´s where I always wanted to go”.

Most of the tracks documented on “Moonflowers & Mini-Skirts” were recorded as library music and are released here for the first time commercially. The compilation – described by Thomas himself as “the best documentation of my work ever” – also features several unreleased film and TV themes from the late sixties and early seventies incl. the theme to the ski-bum-flick “Happening In White” (1969) – directed by Brigitte Bardot´s ex-husband Gunter Sachs. The compilation is rounded off by three super-rare vocal nuggets by actresses Uschi Glas & Senta Berger and – yes, indeed – Mrs. Donna Summer: “Black Power” is her first ever & so far commercially unreleased recording (recorded in 1969 for the TV thriller series “11 Uhr 20”) – a true collector´s item (if there ever was one).

Listening to these 19 tracks now they sound as powerful, mad, daring and inventive as they did almost 30 years ago – a fact that says a lot about the uniqueness of Mr. Thomas´ sound. Release date: October 19, 1998.

Record Collector magazine said in their review: “Thomas´ music is one of the most important rediscoveries …exhilarating blasts of horns and percussion… buy this for the powerful rhythms and irresistible arrangements that are Thomas´ forte.” 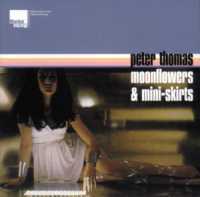